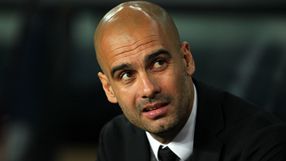 The holders, bidding to become the first club to win back-to-back European titles since AC Milan in 1990, lost 1-0 to the ultra-defensive Londoners at Stamford Bridge last week despite dominating possession and creating a host of chances.

Then, in a dramatic return match at the Nou Camp, they were unable to kill off their rivals despite leading 2-0 on the night and having an extra man following the dismissal of Chelsea captain John Terry shortly before half-time.

World Player of the Year Lionel Messi could not add to his 63-goal season, smashing a penalty against the bar just after the break and later striking a low shot that ricocheted off a post before the visitors rallied to draw 2-2.

He has now failed to score in eight games against Chelsea, twice as many as against any other club in Europe.

Guardiola told a post-match news conference he did not know what else Barca could have done but their elimination from Europe's elite club competition highlighted the fact that when their flowing passing game fails they have little scope to adjust their tactics.

With only defenders Carles Puyol or Gerard Pique able to challenge the imposing Chelsea players in the air, pumping balls into the box was not much of an option, especially after the latter went off with concussion midway through the first half.

In the end, Guardiola was left musing on whether luck was simply against the club this season following a spectacular run of success that has yielded 13 trophies since he took over in 2008.

"I have a feeling that sometimes football is like this," the former midfielder told reporters.

"To be honest, I just think that this year was not our turn. This year, it seems like we couldn't do it and that's it.

"I am sorry if I am not very clear but I have a lot of emotions inside right now. Maybe in time I will see things more clearly. I don't even know how I feel really.

"I don't know what to tell the players about why they are not in the final Yes we are sad but it's not our saddest night."

The 41-year-old, who has yet to extend his contract beyond the end of this season, religiously sticks to a way of playing he and most of his squad learned at Barca's youth school, where the ball is made to do the work and offense is paramount.

"We are not a team that can play in different ways," he said. "We have a peculiar way of playing and the opposition adjusts to that and that's it.

"We did everything we could and we got to a semi-final but no matter what we did it hasn't been enough.

"Probably we did something wrong so we need to see what that was and try to correct it in the future.

"Maybe this is a lesson I should learn, that we should hold back and not be so offensive."

With arch rivals Real Madrid closing in on the La Liga title, Barca's focus now shifts to the King's Cup final on May 25 against Athletic Bilbao and Guardiola said h