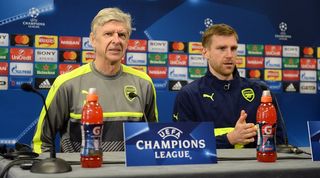 Per Mertesacker believes Arsenal players let Arsene Wenger down during the latter stages of his tenure at the Emirates Stadium.

Arsenal finished outside the top four in the Frenchman's final two seasons at the helm, although they did win the FA Cup in 2017.

And Mertesacker, who played under Wenger for seven years and now works as manager of Arsenal's academy, believes he and his team-mates did not do their long-serving boss justice.

"Arsene Wenger was always the kind of manager whose belief in his team’s qualities was steady as a rock and who approached matters with never-ending patience," the former centre-back wrote in Big Friendly German, as quoted by the Evening Standard.

"He didn’t lose his nerve during losing streaks, either. He stuck with his convictions and his players, no matter how strong the wind was blowing. It was his greatest strength.

"Wondering whether it was also his greatest weakness and whether he was he too lenient with us is, in my opinion, a little too simplistic. If the fans had got their way, there would have been five new top signings every year. ‘Spend some f***ing money!’ they would chorus from the stands after defeats.

"But Wenger trusted the players he had. I never met another manager who believed more strongly in his squad’s ability.

"In 2015/16, he didn’t buy a single outfield player, just a new keeper - Petr Cech - because he was convinced that the squad was good enough to win the title. People were beside themselves, but Wenger was thinking on a deeper level: ‘What happens to my starting forward if I add a new one? Is that really going to improve the team, or would I be unsettling my best man? Is five people fighting for the same position a good thing?

“First and foremost, Wenger saw us as human beings and he had a lot of faith in us, which is why he stood by us. Ultimately, we as players need to ask ourselves whether we did everything possible to justify his trust. Did we implement his instructions perfectly? Were we pulling together? Did we learn from our mistakes? No.

"Wenger has won three Premier League titles, which is proof enough of his standing as a ­manager. The team, on the other hand, had fallen short since 2004.”