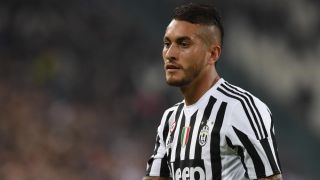 Roberto Pereyra is eager to quit Juventus and join Napoli, the midfielder's agent has said.

The 25-year-old moved to Turin from Udinese in 2014 but has found first-team opportunities limited under Massimiliano Allegri.

Pereyra made just nine starts in Serie A last season, and the signing of Miralem Pjanic for a reported €32million fee has only cast further doubt on his place in Allegri's plans for 2016-17.

The former Argentina youth international is now close to sealing a move to Napoli, although disputes over image rights are holding up the final stages of negotiations.

"I'm waiting for a call from [Napoli director] Cristiano Giuntoli to meet up around a table in Milan and discuss the situation," Pereyra's agent, Sergio Furlan, told CalcioNapoli24.

"There are a few problems with image rights, but we knew that would always be something to consider with Napoli. We'll try to resolve the situation.

"Juve and Napoli are talking now. Roberto really likes the idea of moving to Napoli and we hope it can all be resolved in the best way."