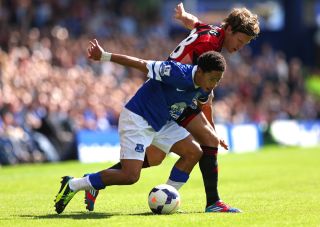 Defender Alcaraz has not featured for the Merseyside outfit since his close-season switch from Wigan after undergoing groin surgery.

South Africa midfielder Pienaar, meanwhile, has been sidelined for the last four Premier League games due to a hamstring problem - but Everton boss Martinez has revealed that there is a slight chance the duo will be fit for the clash with Steve Bruce's side.

"Stevie has reacted really well to treatment and he is progressing extremely well," Martinez told the club's official website.

"Antolin Alcaraz has had a very good period as well, so, all in all, those two have benefited enormously from this international break.

"We don't want to put a date on it. We are very much seeing their reaction and seeing how quickly they can take the workload on.

"In medical terms, they shouldn't be fit for Hull, but I would not say they cannot make it.

"There's still a question mark over them but Steven is a litle bit ahead.

"It's been really positive to see them with big smiles and enjoying their work."