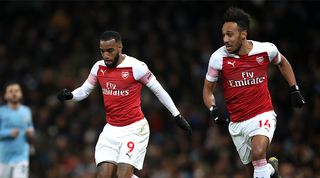 The Arsenal strike partners had both been linked with moves away from Arsenal at points this summer.

However, talkSPORT are reporting that both Aubameyang and Lacazette have agreed contract extensions with the club.

BREAKING: @talkSPORT2 understands that Alexandre Lacazette and Pierre-Emerick Aubameyang have signed new contracts with the club.

Join @BroadcastMoose for more on this story!

Aubameyang, 30, was linked with a possible move to China earlier in the summer, with multiple clubs reportedly offering the Gabonese striker big money.

Similarly, Lacazette was understood to be subject to interest from Atletico Madrid and Barcelona after an impressive season in north London.

Since then the pair have been focused on Arsenal's pre-season preperations, however, with both getting on the scoresheet in friendlies.

Between them, Lacazette and Aubameyang scored 50 goals for Arsenal in all competitions last season.