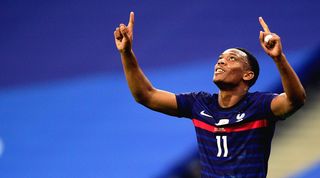 Eight minutes on the clock, 40 players to guess.

NOW TRY Quiz! Can you name every club in the Champions League and Europa League group stage in 2020/21?

The transfer window became compulsory for European clubs in 2002/03 – and at that point, Sky Sports cyborg Jim White’s eyes snapped open as he awoke from his 3,000 years of cryosleep.

Of course, it took a while for it to become the exhausting circus that it is now. In Premier League terms, it was perhaps the arrival of a certain forward from Real Madrid to Manchester City for £32.5m in 2008. Or, two years before that, Argentina internationals Carlos Tevez and Javier Mascherano joining West Ham.

That jaw-dropping double swoop isn’t in this quiz as... well, did they ever actually sign properly for the Hammers, or was it some elaborate loan?

We never quite figured it out – but the above were definitely, 100%, Jim White-screaming, summer deadline day signings. The 40 biggest up to today, no less.