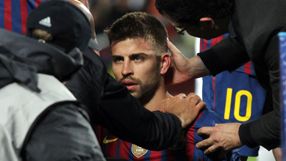 "Gerard Pique underwent various tests which ruled out any injury," Barca said in a statement on their website after the Spain international collided with team mate Victor Valdes in the 17th minute.

"The player will remain under observation until Wednesday," the club added.

Pique played on until the 25th minute before signalling he could not continue and was replaced by Daniel Alves as holders Barca were eliminated 3-2 on aggregate.