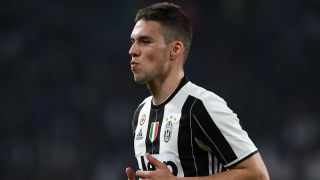 Schalke have completed the signing of winger Marko Pjaca from Juventus on loan until the end of the season.

The Bundesliga side will pay €1million to the Serie A champions, plus a further €500,000 in bonuses, to bring the Croatia international to Germany.

It was reported Schalke were keen to include the option of a permanent transfer in the deal but Juve refused, as they consider his long-term future to be in Turin.

"He had so many positive things to say about the club and the fans here," Pjaca said.

"The coach [Domenico Tedesco] has told me a lot about his playing style and I like that. Now I'm just hoping for as many games as possible."

IT'S OFFICIAL! has joined the Royal Blues on loan from until the end of the season.Welcome to Schalke, Marko January 4, 2018

"We are glad that Marko has decided to join us," said Tedesco of a player who was also linked to Anderlecht.

"Many clubs were interested in him. He brings another quality to our team.

"Marko can be used in a variety of ways. He can play right and left as well as at number eight or in front. He is robust and brings good speed."

Pjaca sustained cruciate knee ligament damage on international duty and only returned in a match for the Primavera side in November. He has not played for Juve's senior side this season.

: "The coach has told me a lot about his playing style and I liked that. Now I'm just hoping for as many games as possible." January 4, 2018

"Pjaca will be loaned out, he needs to play," Allegri said earlier this week.

"He is a boy who has extraordinary qualities and unfortunately this injury has temporarily stopped his progression.

"So he needs to find a team where he can find continuity to return next year in the best condition."

Pjaca joined Juve from Dinamo Zagreb for €23million in July 2016, the Bianconeri winning the domestic double and reaching the Champions League final in his first season in Italy.