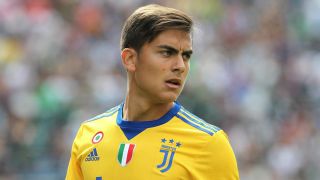 The form of Juventus star Paulo Dybala has Serie A defenders running scared, according to Italy great Alessandro Del Piero.

The Argentina international hit a hat-trick on his 100th Juve appearance on Sunday to help the champions to a 3-1 win over Sassuolo and maintain their 100 per cent record at the start of their title defence.

Dybala has scored eight times in those four league games and has 10 in six appearances in all competitions following an explosive start to the campaign.

His first at MAPEI Stadium was a sublime curled effort from outside the penalty area and he scored two more after the break, prodding home a clever toe-poke finish before completing his treble with a fine free-kick.

Former Juve star Del Piero says it is uncertainty over how he will try to score that makes Dybala so dangerous.

Asked about the free-kick, Del Piero told Sky Sport Italia: "It wasn't an exceptional one and it wasn't at too much of an angle but there was just enough of one for him to score.

"[Sassuolo goalkeeper Andrea] Consigli was almost in awe and that tells you Dybala is growing, not only with his goals but also in terms of how he plays.

"People are afraid to face him at the moment, even when it comes to free-kicks. You don't know what can happen.

"Consigli could have saved it but he moved too late. The free-kick was well-hit, anyway."