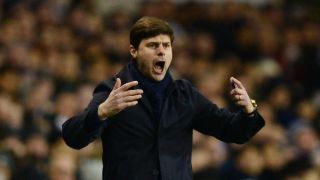 Mauricio Pochettino says Tottenham paid the price for their profligacy in the 1-0 defeat to Premier League title rivals Leicester City.

And their failure to find the breakthrough was ultimately punished as Robert Huth's powerful late header sent Leicester level on points with Arsenal and left Tottenham seven points off the leaders.

Pochettino believes there are plenty of positives to take from the loss, but was disappointed by their lack of killer instinct in the final third.

"We gave our all and created chances. We need to take the positives and prepare for Saturday," he said.

"If you don't score they are always alive and motivated. It's difficult to accept when you give your all. Our effort was unbelievable.

"We created more than them but lost. We need to be stronger and learn."

Full-back Ben Davies says the mood in the Spurs dressing room was despondent after the game.

"We're gutted. We're angry and disappointed. We've been caught with a sucker punch," he said.

"We'll need to get back on the training pitch. Fortunately there's another game quickly and no time to dwell on it."