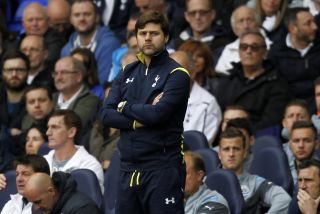 Second-half goals from Sammy Ameobi and Ayoze Perez helped Newcastle complete an impressive comeback as Spurs were beaten for the third time at home in the Premier League this term on Sunday.

Emmanuel Adebayor had opened the scoring for Pochettino's side in a first half that Tottenham dominated in large spells.

However, after conceding Ameobi's equaliser within seven seconds of the second half kicking off and later Ayoze's first top-flight goal, the Argentinian was left frustrated by his team's lack of concentration.

"After half-time, within five seconds we concede - it's true, a stupid goal," Pochettino explained.

"It was a shock because it all changed in this minute. Six or seven seconds earlier, all was happy in the stadium with a good energy and our supporters were happy and believing we were going to get a good result.

"It's impossible to go to the pitch and not be ready to play. I think [there was] a lack of concentration from us and we need to work on our mentality because it's not tactical or physical, it's concentration and mentality.

"This is our challenge to improve. It's not easy and we need to be more strong and like a team. We need to speak, to create a different situation on the training ground and work. We know how but you need time to work in this area."

The defeat leaves Tottenham 11th in the Premier League after back-to-back losses, but Pochettino is confident his side can bounce back so long as they exhibit football similar to that on show in the first half.

"The lack of concentration in the second 45 minutes makes that all change. We need to improve our mentality like a team.

"I am not concerned about the table because we have a lot of time to recover the points. Now, our challenge is improve our mentality, to create a winning mentality."