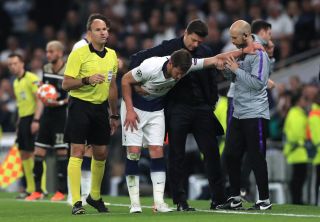 Mauricio Pochettino insists Tottenham’s medical staff followed concussion protocols after Jan Vertonghen was allowed to return to the field despite suffering a serious-looking head injury in the Champions League semi-final loss to Ajax.

The defender has since been given the all-clear by Spurs, who say he has not suffered a concussion, and walked unaided out of the Tottenham Hotspur Stadium after his side lost the first leg 1-0.

But questions remain over the first-half incident against Vertonghen’s former club Ajax on Tuesday, when a clash of heads with team-mate Toby Alderweireld left him bloodied and in need of treatment.

Referee Antonio Mateu Lahoz spoke to Spurs’ medical staff before allowing the defender to return to the field, only for the 32-year-old to quickly go off again.

Pochettino had to put his arm around him to help keep the groggy defender up, before he was carried away after appearing to retch by the touchline.

A Spurs official told Press Association Sport after the match that the defender was fine and had passed all concussion tests, although Vertonghen will have more assessments over the coming days.

“I think it’s so important things, the rules and the protocol are there, and our medical staff follow the protocol.

“I was never involved. The decision was the doctor and the referee asked.

“He goes in. In the next action, we need to put him out because he didn’t feel well.”

Pochettino said the medical staff will always be the “boss” in such situations and that he would have made the change sooner had he been instructed to as a player’s health is always key.

Asked how Vertonghen is now, the Tottenham manager said: “He’s OK, he is good, he was walking away. He was more relaxed. I hope it is not a big injury or a big issue.

“I don’t know (what the latest is). He was walking away from the stadium now. I hope he is well.

“You know very well you need to keep eyes watching him and analysing him because it was a big knock. But I hope it is not a big issue. At the moment, it is OK.”

UEFA implemented new concussion procedures across all of its competitions following approval by the Executive Committee in September 2014.

Champions League regulations state: “Any player suffering a head injury that requires assessment for potential concussion will only be allowed to continue playing after the assessment, on specific confirmation by the team doctor to the referee of the player’s fitness to do so.”

Lloris was in goal on Tuesday night and could not stop Donny van de Beek’s 15th-minute effort in north London, where David Neres hit the post late on as Spurs pushed for an equaliser.

“I think it is still open,” Pochettino after the semi-final loss.

“It is going to be difficult because we lost the game.

“Now it is about preparing for the second leg and go there and try to win the game.