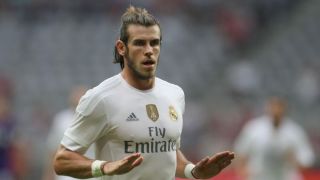 Tottenham head coach Mauricio Pochettino would welcome Gareth Bale back at White Hart Lane if reports of a first option clause prove to be true.

Documents released by the Football Leaks website appear to show that Madrid paid €101 million to take Bale from Spurs in 2013 and also that the Premier League club have a clause to match any offers received for him.

Bale is enjoying an impressive campaign at Madrid - despite Rafael Benitez's sacking in January and the ongoing calf injury that sees him sidelined from Zinedine Zidane's plans.

But Pochettino was open to the possibility of Bale returning, telling reporters with a smile: "I don't know – it's about rumour.

"If we have the full option to sign him then why not?

"He's a great player and he's a player who can improve our squad. This is the type of profile we [try to] find."

Emmanuel Adebayor - whose Spurs contract was mutually terminated in September - has been linked with Palace, whose manager Alan Pardew confirmed he was a target in the current window.

But Pochettino refused to comment on the striker, adding: "It's not my problem.

"I think that I cannot give an opinion about Adebayor or Crystal Palace.

"I respect him and Crystal Palace and what is happening at different clubs is not my problem."