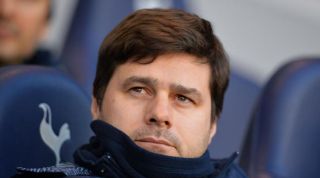 Goals from Cheikhou Kouyate and Diafra Sakho looked to have given West Ham a third consecutive win at White Hart Lane at the end of a week of frenzied speculation over manager Sam Allardyce's future.

Tottenham came roaring back in the second half, though, and Danny Rose pulled a goal back with a scuffed strike nine minutes from time to set up a tense finale.

West Ham appeared to have weathered the storm until Harry Kane was brought down by Alex Song in the penalty area and scored a last-gasp equaliser from the rebound after his spot-kick was saved by Adrian.

Tottenham head coach Pochettino thought his side were good value for a point, which did little to enhance their chances of securing a UEFA Champions League spot.

He is quoted as saying on BBC Sport: "When you analyse the full 90 minutes I think we deserved one point. We started very well, had three chances to score, including the one where Harry Kane hit the post.

"When they scored it was difficult for us to play, because they play very deep and the counter-attack is very good for West Ham with Sakho and [Enner] Valencia who are very fast.

"But in the second half I thought some decisions were against us - the second goal was offside. But we need to finish better and score more goals.

"I think we showed character - that's the most important thing. Going into the last 10 minutes at 2-0 down, to finish the game 2-2 is something to be proud of."