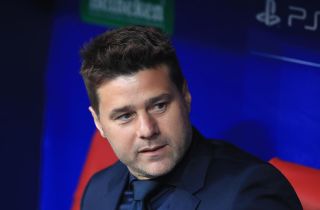 Tottenham boss Mauricio Pochettino is not prepared to let his side be ambushed by Olympiacos in their Champions League opener and has told them to show why they are favourites.

Spurs begin their Group B campaign in Athens on Wednesday against a Greek side who have a notoriously good record at home.

Still, last season’s finalists will be heavily fancied to open with a win, but only if they can handle the atmosphere and match their opponents’ enthusiasm.

“We cannot talk in different way, a few months ago we played final of Champions League and (playing) Olympiacos will put us in this level of favourites for the game,” Pochettino said.

“I respect the opposition and the history and it is going to be tough here. You need to show why you are favourites.

“If you are better than opponents then OK, you were better but before the game in the Champions League you need to show full respect and Olympiacos are a very good team.

“Their record here in this stadium in Europe is so good and it’s going to be a tough atmosphere, the first game of group stage and excitement will be high.

“They will have good players and if we are not focused and don’t take the game in our best condition we are going to suffer.

“But last season we played in the final of Champions League so it’s normal people think before the game, Tottenham is one step above Olympiacos but in the end you need to show it on the pitch.”

Spurs surprised many last season by making it to the final, where they lost to Liverpool in Madrid.

Even if their run to the showpiece event put them on the European map, Pochettino says his side will not be expected to get back there this time around.

“No one today will give us a chance to be one of the contenders to be in the final in Istanbul but that is normal,” he said. “That makes it very exciting.

“We know to repeat the same campaign we need to play in our best. It is so early to talk about the final but most important is to show our quality, our squad quality from tomorrow and do our best.

“I don’t care if people think. If we are contenders or not because we went to the final and have a possibility to fight for this title.

“I don’t care. I am focused on starting this Champions League in a good way.”

That could be imperative as in a group that also contains Bayern Munich and Red Star Belgrade, they cannot repeat their horrible start to last season’s competition.

They had just one point after three games and needed a miraculous set of results to make it through to the knockout stage.

Pochettino joked he would accept a similar start to guarantee being in the final again, but knows his side can ill-afford a repeat.

“I sign to start the same and be in Istanbul. But we know it is so important to start by winning,” he said.

“Always in football, you can be aware, talk and work but when we kick-off we need to show our quality.

“You cannot relate one season to another. In football it is not about talking but showing.

“We need to show we learned from the past and start this group stage in a good way, by winning.”

Juan Foyth (ankle), Giovani Lo Celso (hip) and Ryan Sessegnon (hamstring) are injured for Spurs while full-backs Serge Aurier and Danny Rose have not travelled with the squad as they get a rest.