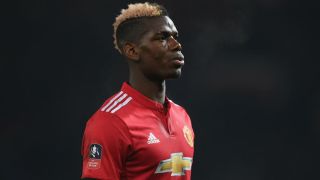 Paul Pogba has been ruled out of Manchester United's FA Cup fifth round trip to Huddersfield Town on Saturday due to illness.

Much of the build-up to the match from United's perspective was dominated by Pogba, with Jose Mourinho strongly refuting recent claims that he and the Frenchman had fallen out.

Pogba has struggled to find his best form of late, something Mourinho has acknowledged, but the Portuguese coach slammed comments about their apparently fractious relationship as "lies".

Mourinho also insisted Pogba was in line to start at the John Smith's Stadium on Saturday, with United aiming to reach the FA Cup quarter-finals.

The boss says that will feature in tomorrow's fifth-round tie. February 16, 2018

But the midfielder has seemingly fallen ill overnight, with United issuing a statement on Saturday revealing Pogba's absence and that he is to be replaced in the squad by 19-year-old Ethan Hamilton, who will be involved with the first-team squad for the first time.

A club statement read: "Manchester United midfielder Paul Pogba will miss the Emirates FA Cup tie at Huddersfield Town due to illness and, as a result, Academy prospect Ethan Hamilton has taken his place in the squad."

The news will likely fuel reports of Pogba and Mourinho's uneasy relationship, particularly given the manager's rant in Friday's news conference.

United have not said whether his illness is likely to affect Pogba's chances of featuring against Sevilla at the Ramon Sanchez Pizjuan in the Champions League round of 16 first leg on Wednesday.