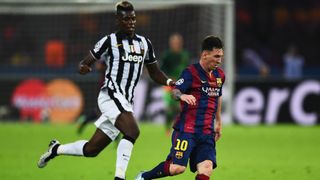 Paul Pogba has denied he wants to join Barcelona, but spoke of his desire to one day play alongside Lionel Messi or Cristiano Ronaldo.

The Juventus midfielder was named in the 2015 FIFPro World XI after helping the Serie A outfit win the Scudetto, Coppa Italia, and reach the Champions League final.

Pogba was present in Zurich on Monday as Messi won a record fifth Ballon d'Or crown, finishing in front of Real Madrid's Ronaldo.

The 22-year-old said a goal of his is to play alongside one of the two in the future, but when asked if he wanted to join Barcelona he claimed: "I've never said that.

"Right now I am playing with Juventus."