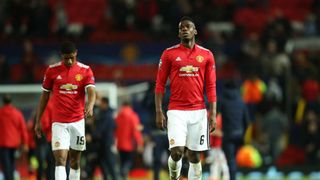 Paul Pogba revealed a rather startling new hairstyle inspired by France ahead of international friendlies with Colombia and Russia.

The Manchester United star has had a difficult time of late at club level, falling out of favour with Jose Mourinho and attracting criticism from pundits.

Some experts, such as Graeme Souness and Roy Keane, have even made comments about his outlandish hairstyles in recent times, with the latter recently saying: "He seems to have a big personality whether it be social media, the cars he drives, his haircut - he needs to bring all that onto the football pitch."

But the former Juventus man is clearly not letting such remarks affect him, as he showed off another wacky 'do' on Monday, prepared just in time for joining up with the France squad.

And France's get together saw him come face to face again with Wissam Ben Yedder, Sevilla's two-goal hero from the Champions League win at United last week.

The striker received his first call-up to the France national team on the back of that performance, but he was keen to get back on good terms with Pogba, posting a photo of the pair shaking hands with the caption "no hard feelings".