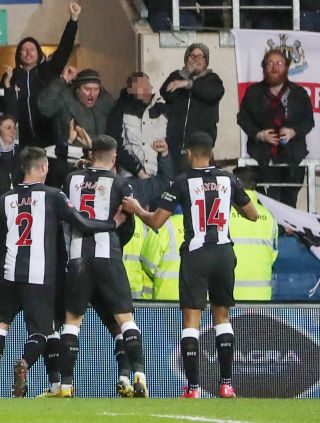 Police have launched an investigation after a Newcastle fan appeared to expose himself during Tuesday night’s FA Cup fourth-round replay victory at Oxford.

Television cameras captured the supporter as he celebrated Allan Saint-Maximin’s late strike, which handed the Magpies a face-saving 3-2 win at the Kassam Stadium, and the images were shared widely on social media.

A statement from Thames Valley Police said: “Thames Valley Police has received a report of an exposure incident which occurred during the Oxford Utd vs Newcastle Utd match on Tuesday evening. An investigation has begun and no arrests have been made at this time.”

Newcastle have offered their full support to officers attempting to identify the man having described his actions as “clearly inappropriate”.

The incident happened deep into extra-time after Frenchman Saint-Maximin had come off the bench to fire the Premier League side to victory over their League One opponents, who had scored twice inside the final six minutes of normal time to cancel out a 2-0 deficit.