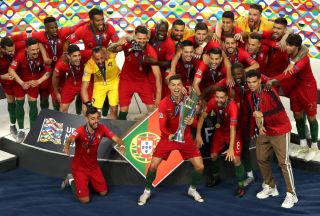 Goncalo Guedes scored the only goal of the game as Portugal beat Holland to be crowned the first-ever Nations League champions.

The final in Porto was not a game for the ages as a match billed as a battle between the two captains, Cristiano Ronaldo and Virgil Van Dijk, was settled by Valencia forward Guedes on the hour mark.

The 1-0 win was enough for the reigning European champions to add the inaugural Nations League crown to their honours list with victory in front of their own fans.

But, strangely in a country where Ronaldo is revered, it was Harry Maguire’s name which echoed around the Estadio do Dragao early on as those England fans who had purchased a ticket for the final hoping to see the Three Lions made the most of their evening.

Bruno Fernandes had the first half-chance of the final for Portugal while Steven Bergwijn ran down a blind alley as Holland looked to break at the other end.

The first meeting of Van Dijk and Ronaldo saw the Dutch skipper block a shot behind for a corner, with Jose Fonte rising highest to draw a fairly simple save out of Jasper Cillessen.

Fernandes then stung the palms of the Barcelona goalkeeper as the hosts began to turn the screw in search of the opener.

With the first half wearing on, it was Sporting midfielder Fernandes who again came close as he whistled a strike inches over the crossbar from the edge of the box.

After the interval, Ronaldo opted to move away from Van Dijk and chance his arm against the rest of the Dutch backline, breaking through at one point to eventually help Portugal win a corner.

The hosts were beginning to dominate as Matthijs De Ligt was on hand to turn a dangerous Raphael Guerreiro cross behind.

The home supporters followed the step up from their team in kind as the atmosphere rose – but then the Portuguese almost fell behind, Rui Patricio getting down to prevent Memphis Depay’s effort squeezing in at his near post.

It was Portugal would deservedly take the lead, though, as Guedes popped a pass off to Bernardo Silva, who squared it back for the forward to fire in a shot which was too hot for Cillessen to handle.

Depay came close to equalising soon after but his header was held at the second attempt by Patricio, while Marten De Roon sent Holland’s next chance high over the crossbar as Portugal closed in on victory.

Patricio still had work to do, however, as the Wolves goalkeeper shovelled a strike from substitute Donny Van De Beek behind for a corner.

At the other end, Joao Moutinho wanted a penalty but was given short shrift from referee Undiano Mallenco, before Nelson Semedo’s driven shot was held by Cillessen.

Ronaldo, who struck a hat-trick in the semi-final win over Switzerland and ends the finals as the top goalscorer, could not get in on the act as he sent a last-minute free-kick wide.

But, as Van Dijk ended the night as an auxiliary striker, it would be the Juventus forward who would become the first man to lift the Nations League trophy and add more silverware to his ever-expanding collection.