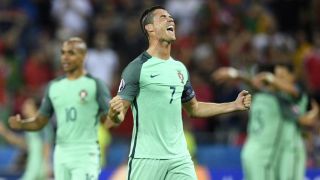 Portugal star Cristiano Ronaldo insists there is more to his team than just him, but never doubted they could reach the Euro 2016 final.

The Real Madrid forward opened the scoring with a header before setting up Nani in a 2-0 victory over Wales in Lyon on Wednesday.

Ronaldo always felt such a run was possible for Fernando Santos' men, who won in regulation for the first time at the tournament.

"We believe everything is possible in football," he said.

"Personally speaking, I am very happy. This is something that I wanted after winning the Champions League.

"I believed in my heart we would go far in the Euros. Maybe it didn't start off as well as we wanted it to but this is not a 100 metres dash, this is a marathon.

"We got past the group stages to the knockout stages.

"When you think of Nani, Renato [Sanches] and [Ricardo] Quaresma who has also scored, so we're all a team. Portugal is not all about me."

With his 50th-minute header, Ronaldo equalled Michel Platini for most goals at European Championships with nine.

The 31-year-old, however, played down the achievement, saying reaching the final was more important.

"The most important thing was for the team to believe that we could make it to the final," Ronaldo said.

"Congratulations are in order for the coach, for the medical staff and to everyone who works with us.

"Record breaking is something very nice. I have broken many records before and I am still breaking records for club and country.

"But this all comes naturally and the crucial thing was to reach the final.

"I am very happy and I am very proud of all my team-mates. Me and the boys have always dreamt of being there. Now it's almost there.

"I've always dreamt of winning something for Portugal and now it's just one step away.