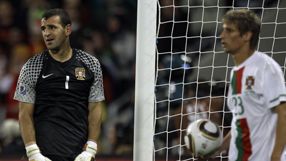 "Eduardo's performance was brilliant. He made some very important saves," Portugal coach Carlos Queiroz told reporters after the 1-0 second-round loss to Spain on Tuesday.

After a fine season at Braga where he contributed much to the side's surprising title bid, the keeper had been linked to Portuguese champions Benfica. His strong showing in South Africa has prompted talk of a move to a bigger European league.

"Yes, there has been talk of a transfer. Let's see what happens in the next few days," the 27-year-old said.

Coentrao may also be talking to his agents after impressing on the Portugal campaign. The Benfica player only had one cap before the finals but started in all four games in South Africa.

A Spanish sports newspaper said last week that Bayern Munich had shown an interest in signing Coentrao, 22, but the move has yet to be confirmed.

"I have a contract with Benfica until 2015, but I don't know how things stand right now. It seems there are clubs interested," he told reporters.

"I would love to play for Benfica in the Champions League next season, but I'm not saying I want to be at the club forever, since in terms of budgets there are clubs that can offer more," he added.

Midfielder Tiago moved to Atletico Madrid on loan in January to end his nightmare at Juventus and win back his place in the Portugal squad. He shone in the win 7-0 win over North Korea making an assist and grabbing two goals himself.

Atletico president Enrique Cerezo told Reuters last week that the club is in negotiations with Juventus to sign the player on a permanent deal.