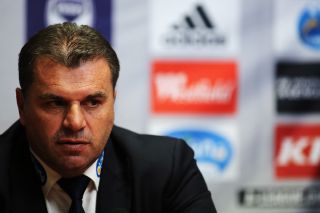 The 48-year-old's contract runs until August 2018 and will see Postecoglou takes charge of the Socceroos at the 2014 FIFA World Cup Brazil, the 2015 AFC Asian Cup and the 2018 FIFA World Cup Asian qualification matches.

Postecoglou will officially start his new role on Monday and will make his national coaching debut against Costa Rica at Allianz Stadium on November 19.

"The Socceroos belong to the people of this nation," a humbled Postecoglou said.

"It's my job to make sure we represent all that's good in Australian football.

"We need to strive for greatness, to play with spirit and have an unwavering belief in our mission.

"I was proud to represent my country as a player and I have the same immense feeling of pride today.

"I thank Frank Lowy, David Gallop and the FFA (Football Federation Australia) for having the faith in my ability to do this job successfully."

FFA chairman Frank Lowy declared Postecoglou the best candidate for the job after edging out Graham Arnold and Tony Popovic following the sacking of German Holger Osieck earlier this month.

"It was always our plan that one day an Australian would be appointed coach, and I said precisely that when we appointed the previous coach," Lowy said.

"But I have never taken the view that the coach should be an Australian for the sake of having an Australian, I have always believed we should get the best person we can for the job.

"The fact that Ange is the best qualified, and an Australian, achieves our objective.”

FFA CEO David Gallop added: "I'm delighted that the game has reached the point where the best-qualified coach for the Socceroos happens to be someone who's learned his football in this country and who lives and breathes the mission of Australian football.

"It shows how the era of full-time professionalism in the Hyundai A-League and qualification for three consecutive FIFA World Cups is driving technical excellence.

"In Ange, the Socceroos will have a Head Coach who has exceptional experience and achievements on the domestic and international stage.

"In any recruitment situation you consider the overall package that the person brings to the role.

"We wanted the best person for the job of coaching the Socceroos to highest possible standards."