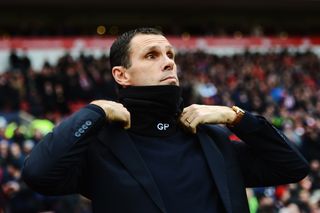 Midfielder Cattermole is rumoured to have been a target for Stoke boss Mark Hughes throughout the transfer window, although the Welshman appeared to quell that speculation last week after Sunderland reached the League Cup final.

Reports have also suggested that striker Fletcher could be on Hughes' radar, but Poyet has moved to insist that Sunderland have yet to receive any interest in the duo.

"I'm pleased in the local newspaper that we didn't throw about any interest about any Stoke players," he said. "That's what they have done for the last week.

"Not one Stoke director has made any formal approach or offer. For them to be linked with two important players for us, is disappointing."

Poyet also spoke about incomings to the Stadium of Light as he is hopeful of securing a deal for Internacional striker Ignacio Scocco, adding: "It's not yet done, but we are very, very close."

Sunderland host Stoke in the Premier League on Wednesday and Poyet deploy forward Connor Wickham following his recall from a loan stint at Sheffield Wednesday, where he scored eight goals in 12 Championship appearances.

But the Uruguayan admits he does yet know what the future holds for the England Under-21 international.

"We are analysing the situation carefully, and we will see what happens next," he continued. "It is impossible to say (what the future holds).

"He is player we can use, and he is a player who has been playing well and scoring goals.

"It will depend on the situation with the squad, including on what happens with Scocco."