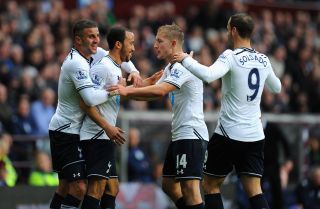 Townsend, who starred in England's final two FIFA World Cup qualifiers, continued his rich vein of form, scoring the first after 31 minutes when his expert delivery found its way past Brad Guzan.

Soldado then made sure of the three points nine minutes after the hour mark to send Tottenham fifth in the Premier League.

While Townsend will again hit the headlines for his goalscoring exploits, the game will also be remembered for all the wrong reasons after a linesman was hit by a smoke bomb thrown from the crowd following Townsend's opener, an incident that could result in an FA investigation.

Villa's only change from the 0-0 draw with Hull City last Saturday saw Nathan Baker replace Ciaran Clark in defence, while top goalscorer Christian Benteke started on the bench after overcoming a hip injury sustained in September.

For Tottenham, Vlad Chiriches made his Premier League debut with Sandro given a first league start since January after recovering from a knee injury.

Andres Villas-Boas was also able to name Aaron Lennon on the bench, having made just one appearance for the club this season following a foot problem.

After a low-key opening 15 minutes, it was Tottenham who threatened first, with Sandro testing Guzan from long range after Soldado appeared to handle the ball.

Ashley Westwood then went close for Villa, with his teasing delivery forcing a good save from Hugo Lloris amid a crowded penalty area.

Andreas Weimann almost took advantage of careless play in the Tottenham backline when he fired over after 26 minutes before Townsend edged the visitors ahead shortly after the half-hour mark.

Townsend whipped in a cross from the right and, while Soldado almost got a touch on it, the initial delivery found its way past Guzan as Villa conceded at home in the league for a 15th consecutive game.

The goal was soured somewhat, however, when linesman Dave Bryan was struck by a smoke bomb as Tottenham celebrated the opener.

Weimann came close to equalising when he curled a Westwood lay-off just past Lloris' left-hand post five minutes before the break, although it was Townsend who had the last chance of the half.

The in-form winger's fierce drive forced a strong right-handed save from Guzan moments before the half-time whistle.

Paulinho saw an effort saved by Guzan four minutes into the second half, although both sides struggled to fashion openings, with Villa opting to bring on Benteke after an hour.

However, Tottenham doubled their lead courtesy of Soldado's third Premier League goal for the club.

The Spaniard took a Paulinho throughball perfectly in his stride before calmly dinking it over Guzan to make it 2-0 after 69 minutes.

Townsend continued to threaten without further reward as Tottenham extended their unbeaten run against Aston Villa to 11 matches in all competitions.