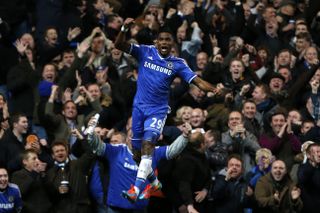 The Cameroon international struck twice in the first half and was on target again just after the break at Stamford Bridge to take his tally to eight goals for the season as third-placed Chelsea stretched their winning run to six games in all competitions.

Javier Hernandez pulled a goal back for United after coming off the bench, but It was another miserable afternoon for boss David Moyes, who will also now be without his captain Nemanja Vidic for a spell after he was sent off in injury time for a wild challenge on Eden Hazard.

Defeat saw Moyes' side beaten for the first time away from home in the league for almost four months, as their chances of retaining their title were made even more remote.

The champions are 14 points behind Arsenal and now face a battle to even qualify for the UEFA Champions League, sitting six points adrift of fourth-placed Liverpool.

Jose Mourinho has no such problems, as he celebrated his 100th Premier League win in only 142 games - requiring less matches than any other manager to achieve the landmark.

Chelsea defender Branislav Ivanovic returned from injury ahead of schedule at the expense of Ashley Cole, while Eto'o was preferred to Fernando Torres. New signing Nemanja Matic started on the bench alongside fit-again midfielder Frank Lampard.

Ashley Young and Phil Jones were back in the United starting line-up as Shinji Kagawa and Chris Smalling dropped to the bench.

United made an encouraging start, but they found themselves behind after 16 minutes when Eto'o conjured up a goal out of nothing.

There appeared to be no danger when the striker picked up a loose ball, but he cut in from the right and jinked past Jones before unleashing a shot from the edge of the penalty area that deflected off Michael Carrick and looped into the far corner of the net.

United responded well to going behind and the lively Adnan Januzaj created a great chance for Danny Welbeck when he picked out the striker in the area, but the England international's tame finish was saved by Petr Cech.

That miss proved to be costly too, as Gary Cahill picked out Eto'o a minute before half-time and the Cameroon international finished from six yards out.

Eto'o then made United pay for some poor defending just three minutes into the second half to complete his treble.

He was first to react when Cahill's header was well saved by De Gea - the alert striker on hand to tuck home the rebound.

Welbeck's frustrating afternoon continued when he headed wide from six yards out, but substitute Hernandez did pull a goal back when he turned in Jones' shot from inside the six yard box 12 minutes from time.

It was too little, too late for Moyes' side though, and Matic came on to make his second debut for Chelsea five minutes from time after rejoining from Benfica as they saw out the victory with ease.

United’s misery was complete when Vidic was then shown a straight red card for a cynical challenge on Hazard, while Rafael was lucky to escape with just a yellow after lunging at Cahill.