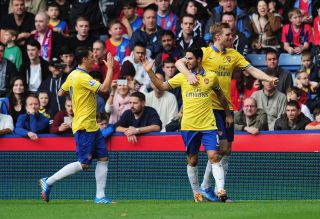 The game marked Palace's first without Ian Holloway, who parted company with the club following Monday's 4-1 win defeat to Fulham.

Keith Millen took temporary charge for the encounter, and he will have been pleased with his side's showing as they competed well with the Premier League leaders.

However, it was Arsene Wenger's men who would claim the spoils when midfielder Arteta converted from the penalty spot after Adlene Guedioura's clumsy challenge on Serge Gnabry early in the second half.

Palace looked to have been handed a lifeline when the Spaniard was dismissed in the second half, adjudged to have denied Marouane Chamakh a clear goalscoring opportunity after hauling him down near the halfway line.

Goalkeeper Wojciech Szczesny preserved Arsenal's advantage in the dying stages with some fine saves, before Olivier Giroud headed home Aaron Ramsey's left-wing cross at the end of a quick counter-attack to finish things off.

Millen made six changes to the side beaten by Fulham, with Jerome Thomas, Barry Bannan and Chamakh among those to come into the side, while Mathieu Flamini and Santi Cazorla returned to Arsenal’s line-up in place of Jack Wilshere and Tomas Rosicky.

The visitors were forced to change things inside the first 10 minutes, though, Flamini replaced by Gnabry after he limped off with an apparent groin injury.

Palace competed well for large periods of the first half, and had opportunities to take the lead themselves, Bannan heading over before Chamakh tested Szczesny with a long-range effort.

Both sides continued to trade chances in an open game, although Arsenal were aggrieved not to have been awarded a penalty as Chris Foy ruled that Damien Delaney's foul on Gnabry had been outside of the box.

But Foy did point to the spot when Gnabry was brought down by Guedioura less than two minutes into the second half, enabling Arteta to step up and fire home confidently from 12 yards.

Wenger's men began to dictate proceedings following the opener and should have doubled their advantage shortly after, Giroud missing the target from point-blank range after good work down the right from Sagna.

However, the game was completely changed after 65 minutes when goalscorer Arteta was shown a straight red card for pulling down Chamakh as the Moroccan attempted to break through on goal.

But Giroud wrapped things up three minutes from time to end the hosts' hopes of a late leveller.