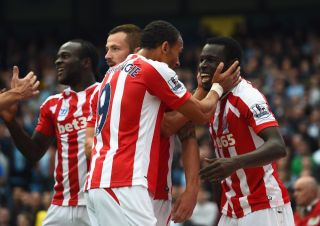 Stoke had failed to pick up a point in any of their previous six trips to Eastlands since returning to the top flight, but ended the home side's winning start to the Premier League on Saturday.

Having soaked up what the hosts had to throw at them, Stoke took the lead courtesy of Diouf's virtuoso run and finish shortly before the hour.

The former Manchester United man broke away in stunning fashion before beating Fernandinho and Joe Hart to open the scoring.

Stoke's first goal against City since September 2012 proved crucial as Hughes' men breathed life into their season against one of the Welshman's former clubs.

For Manuel Pellegrini's side, the result represents a blow going into the international break, with the Chilean boss also seeing midfielder Fernando taken off with an apparent groin problem.

The hosts were given an early scare when Sergio Aguero collided with Ryan Shawcross, although the Argentine striker was quickly back in action after receiving treatment.

Stoke gradually grew into the game and were denied a penalty 18 minutes in when Diouf went down in the area after evading Kolarov.

Lee Mason waved away the protests and the referee was soon required to cool an off-the-ball incident between Shawcross and Stevan Jovetic that capped a scrappy opening half-hour.

Pellegrini replaced the injured Fernando with Fernandinho, before Yaya Toure clipped the crossbar with the final effort of the opening half.

Diouf was again left frustrated when Mason denied him a penalty early in the second half, while Samir Nasri saw a shot deflected wide after good interplay between the Frenchman and Silva.

As in the first half, Stoke's deep and resolute backline proved difficult for the home side to break down.

A curled effort from Toure was beaten away by Begovic, before the lively Diouf gained reward in the 58th minute when he surged forward from inside his own half and nudged the ball past Fernandinho.

Having burst into the area, Diouf tucked the ball past Hart - who will perhaps feel he should have done better - and opened his account for Stoke.

While the home side rallied, it was Stoke who had the better chances to extend their lead as Victor Moses came close to connecting with Peter Odemwingie's cross and Peter Crouch headed wide.

City had a late shout for a spot-kick turned down when Erik Pieters carelessly tangled with Toure but Mason again opted to wave play on and Stoke secured three hard-earned points.