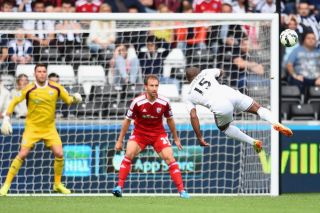 The Welsh club kicked off their Premier League campaign with a 2-1 win at Manchester United, before beating Burnley 1-0 at the Liberty Stadium last weekend.

And they were on the front foot almost instantly on Saturday, Dyer tucking the ball home from a narrow angle in the opening two minutes.

The home side were in total control and Routledge grabbed a deserved second in the 24th minute with an astonishing effort from the edge of the penalty area.

West Brom tried to battle their way back into the tie after the break, but Dyer doubled his own tally in the 71st minute to make sure of three points.

The result sees Swansea head into the international break with a perfect nine points from a possible nine, while West Brom are still searching for their first win of the 2014-15 season.

Garry Monk spoke in the build-up about turning the Liberty Stadium into a "fortress" and there was certainly no warm welcome for West Brom.

Dyer, who scored the goal that settled last weekend's 1-0 win over Burnley, forced his way through the visitors' defence to get on the end of a Gylfi Sigurdsson backheel and put the ball in the net from a tight angle – Jonas Olsson's slip in the box proving costly.

Wilfried Bony fired over as Swansea looked to extend their advantage, but it was a sensational improvised effort from Routledge that eventually put the hosts two up.

Sigurdsson's cross was headed by Craig Dawson to the edge of the penalty area, where Routledge managed to shape his body perfectly to get over the ball and fire a spectacular half-volley beyond Ben Foster.

It could have been three on the half-hour mark when Olsson headed against his own crossbar, before full debutant Brown Ideye's tame effort brought a simple first save of the game out of Lukasz Fabianski.

West Brom announced the signing of winger Sebastian Blanco from Metalist half an hour before kick-off, and Alan Irvine's men looked in need of a creative spark, despite wrestling back some possession after the interval.

Andre Wisdom was lucky to escape punishment when he appeared to block a Bony shot with his arm on the goalline.

The chance came after Dawson had been penalised for a lesser-spotted back pass – a bold, but correct, call by referee Paul Tierney on his Premier League bow.

Bony should have done better in the 69th minute when he sent the ball narrowly over the crossbar after being teed up by substitute Jefferson Montero.

But the result was put beyond doubt two minutes later - Sigurdsson sending Dyer clean through on goal and he made no mistake in slotting the ball past Foster.

Sigurdsson has played a role in all six of Swansea's league goals this season.

Dyer's second ended the match as a contest, but Fabianski had to be alert to deny James Morrison with a diving save before time was up.

A convincing win with a performance to match should leave Monk feeling like the king of his castle, with 'fortress Liberty' established in style.