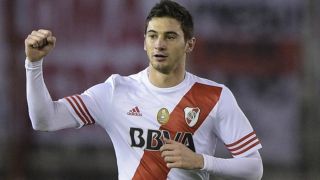 Premier League target Lucas Alario said he watches every Barcelona game to learn from Luis Suarez as he looks to complete a move abroad.

The 23-year-old River Plate striker has been heavily linked with a move to Tottenham to work under fellow Argentinian Mauricio Pochettino, while Liverpool are also reportedly keeping tabs on him.

Alario has been in fine form since joining River from Colon in 2015, scoring a goal almost every second game for the Argentine giants.

The centre forward found the net in River's 3-0 aggregate win over Tigres UANL in the 2015 Copa Libertadores final, which sealed their spot in the Club World Cup later in the year.

It was there Alario was exposed to the genius of Barca striker Suarez, who scored a hat-trick as the Catalan side humbled River 3-0 in the final.

Ever since then, Alario revealed he has watched Suarez to take inspiration from the Uruguay international.

"After that final in Japan, I watch every Barcelona game to learn from Suarez and follow his movements," Alario told Clarin.

The promising forward also said he was a big admirer of Suarez's compatriot Martin Cauteruccio as well as Marco Ruben, both plying their trade in the Argentine Primera Division.