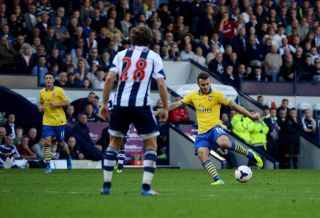 Claudio Yacob headed the home side in front shortly before half-time, only for Jack Wilshere to equalise in the 63rd minute to earn his side a point.

The result brought an end to Arsenal's run of eight consecutive away league victories but it was still enough to see Arsene Wenger's men leapfrog Liverpool to go back to the summit on goals scored.

Wenger also made two alterations from the midweek UEFA Champions League victory over Napoli, Carl Jenkinson coming in for the injured Bacary Sagna at right-back while Wilshere was preferred to Tomas Rosicky in midfield.

After a quiet start, the hosts were denied an opener in the 15th minute as Wojciech Szczesny dived to his right to keep out Berahino's effort.

The visitors responded strongly, Mesut Ozil picking out Kieran Gibbs on the left-hand side of the area, but the full-back blazed his effort over.

Clear sights of goal were proving rare with Myhill not tested properly until the 40th minute, getting down to his right to deny Aaron Ramsey.

It should have been 2-0 a minute into the second half, Anelka getting his feet in a muddle after being picked out six yards from goal following superb work down the left from Berahino.

And in a frantic opening to the half, Arsenal responded immediately, with Wilshere firing high and wide after being played in by Olivier Giroud.

Anelka wasted another golden opportunity to double the lead in the 52nd minute after springing the offside trap from Liam Ridgewell's pass, but with just Szczesny to beat the ex-Arsenal man placed his effort wide of the right-hand post.

West Brom were punished for their wastefulness in the 63rd minute as Arsenal equalised with a goal of real quality.

Giroud fed substitute Rosicky, whose lay-off was met first time by Wilshere 20 yards out, and his sweet strike took a slight deflection of Jonas Olsson's shin, with the ball deviating just enough to beat Myhill low to his left.

Giroud then volleyed wide when well placed in the 72nd minute before Billy Jones stung the palms of Szczesny with a rasping drive a minute later.

Myhill did brilliantly to deny Giroud in the 75th minute when it looked as though the Frenchman had rounded the goalkeeper and would tuck the ball home.

West Brom had late appeals for a penalty turned down when Laurent Koscielny bumped into Shane Long in the area, but the referee was not interested.