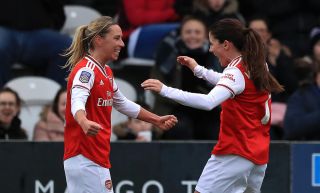 Arsenal manager Joe Montemurro was relieved his side came through their first game of the new year unscathed as the reigning Women’s Super League champions beat Birmingham 2-0.

First-half goals from captain Kim Little and Jordan Nobbs secured the leaders a 10th win of the campaign.

Montemurro admitted his side were not at their best but is happy to move on and focus on next week’s trip to Brighton.

“When you don’t play for two-and-a-half weeks you expect that but all in all a professional performance, job done.”

Nobbs’ goal was her third of the campaign and the striker is happy to have made a positive start to the new year after her 2019 was blighted by a knee injury that saw her miss the World Cup.

“I’m glad to just get back on the scoresheet and hopefully start the year on a high for me personally,” she said.

“We needed to keep the ball a little bit better. But we didn’t concede and we scored goals and I think we just need to take the positives from that.”

Birmingham striker Rachel Williams felt her side had been “too nice” in the first half before improving after the break.

She added: “Arsenal are a good team so you are going to come here and respect them, but if you do that you’ll get hammered.”