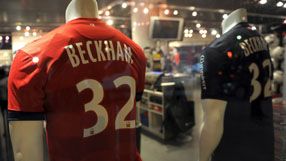 Beckham, 37, has been looking for a new team since leaving LA Galaxy in December and moving back to his home city of London with his family. Qatari-backed PSG look the ideal destination for his last hurrah as a player.

The only professional club in Paris, PSG are long on cash and ambition. Founded in 1970, they lack the history that has helped Beckham's former clubs Manchester United, Real Madrid and AC Milan to develop global followings.

"They do need some kind of substance to their aspirations," said Simon Chadwick, professor of sport business strategy at England's Coventry University.

"Beckham is a footballing aristocrat. He has heritage and a track record," he added, saying that Beckham's affable personality would help to draw fans and sponsors to the club.

France lags behind leagues in other major European nations in terms of revenue but the arrival of Beckham should help to promote the domestic game in the run-up to the 2016 European Championship which the French will host.

"Sponsors are still keen to be associated with David Beckham," said Adam Bull, senior consultant with the sports business group at Deloitte.

"It's the same case as when he went to LA Galaxy. The status of MLS [Major League Soccer] was enhanced by Beckham and it will be the same for Ligue 1," he added.

Beckham placed eighth on the Forbes list of highest-earning athletes last year, raking in $46 million, most of which came from endorsements.

The Beckham brand is a family affair, with his wife Victoria matching his celebrity after swapping pop for fashion design, and one of their sons recently modelling for Burberry.

Beckham's commercial deals draw both on his looks and his reputation as a family man.

That versatility enables him to pose as an underwear model for fashion group H&M and act as an ambassador for supermarket group Sainsbury's efforts to get more children doing sport.

"For David Beckham, it extends the life of his brand further. Just when you thought it was over, it carries on going," said Chadwick.

Beckham has had a long relationship with Adidas. He signed his first contract with the German sportswear company in 1996 when he was beginning to make a name for himself at Manchester United.

"As a long term sponsor of David Beckham we would like to congratulate him on his move to Paris Saint-Germain. We look forward to continuing working with him in the future," Adidas said in a statement.

Beckham's critics argue that he is more style than substance, his image helping him to win more publicity than his footballing abilities now merit.

However, those who have worked with him have praised his professionalism and desire for the game.

"Great player and great person, he deserves it. Bonne chance!" he said on the Twitter social media site.