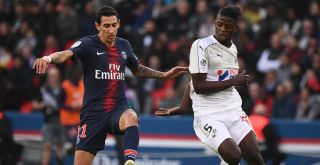 Thomas Tuchel expects to have Paris Saint-Germain pair Marco Verratti and Angel Di Maria available for Wednesday's Champions League tie with Napoli, despite both coming off in the 5-0 win over Amiens.

PSG's winning streak to start the 2018-19 Ligue 1 campaign was stretched to 10 games with another comfortable victory on Saturday, with Marquinhos and Adrien Rabiot heading in from first-half corners before Julian Draxler, Kylian Mbappe and substitute Moussa Diaby all scored in the final 10 minutes.

Tuchel was able to rest Neymar after he had featured for Brazil four days earlier, yet the German was given cause for concern as Verratti came off at half-time while Di Maria, who had set up the first two goals, only lasted 59 minutes.

PSG travel to Naples next week for a crucial Champions League tie with Napoli and Tuchel is confident both players, and Thiago Silva, will be fit to feature.

"Like Angel Di Maria. But I think they can play against Napoli. Same for Thiago Silva, who also felt muscle discomfort at the end of training [on Friday]. It was too risky to play this afternoon."

PSG had scored at least three goals in their previous nine victories and they kept that sequence going with a late flurry, though Tuchel admitted the final scoreline was a little flattering.

"It was not a great performance on our part, but we were serious and provided a great collective effort," Tuchel added.

"We deserved to win, even if the score seems a little too high."

One man who did not got on the scoresheet was striker Edinson Cavani.

PSG's all-time top scorer sliced a glaring opportunity wide in the first period and Tuchel admitted he had kept the striker on the pitch so he could try and get among the goals.

"It's normal that a real number nine like him is sad when he has not scored," Tuchel said.

"Maybe it was better to take him out after an hour of play but I left him on the field because I was hoping he would score a goal. That was not the case but he can score against Napoli."