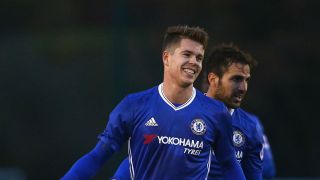 PSV are keen to hold on to Marco van Ginkel beyond the 2016-17 campaign and are hopeful of either extending the Chelsea midfielder's loan deal or making his stay at the club permanent.

Van Ginkel joined PSV on a temporary basis until the end of the season during the January transfer window, having already spent the second half of 2015-16 in Eindhoven.

The 24-year-old has impressed with a string of fine performances and PSV are ready to open talks with Chelsea over another deal.

"We are keen to keep Marco at the club," sporting director Marcel Brands told De Telegraaf.

"Both a loan deal or a permanent move could be an option.

"We tried to bring him in on an 18-month loan deal in January, but Chelsea told us they wanted to re-evaluate his situation during the summer."

Brands also had his say on Oleksandr Zinchenko, who joined PSV on loan from Manchester City until June 2018 at the start of this season, and admitted the Ukraine international's stay at the club could come to a premature end following his inability to secure regular first-team action.

"We have yet to make a final decision on Oleksandr," Brands added.

"But if we are unable to offer him more game time than this season, we might be better off giving his place in the squad to one of our own youngsters."

The 20-year-old has made 11 Eredivisie appearances this term, starting just four times.