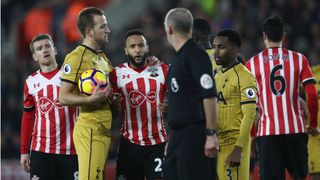 Southampton manager Claude Puel has questioned the red card decision he feels ended his team's hopes of beating Tottenham in the Premier League on Wednesday.

Spurs claimed a 4-1 victory at St Mary's Stadium despite Virgil van Dijk putting the hosts ahead in the second minute.

Redmond was sent off with Tottenham 2-1 up early in the second half when he was deemed to have brought down Dele Alli with a clumsy challenge.

Harry Kane - scorer of Spurs' second goal - missed from the penalty spot but Puel believes the damage was already done.

"After the red card, the game finished," he told Sky Sports. "Afterwards it was too difficult.

"It's hard because the scenario is bad for us and I don't know if the red card is normal but it changed the whole philosophy of the game.

"I haven't seen the action but ... I think it's very hard to take a red card because this is a scenario that changed the whole game for me."

Puel added: "I think it's a big disappointment because we made a strong start and did well in the first 20 minutes, without [opportunities] for the opponent. It was hard to see a comeback in this game.

"Perhaps at the end of the first half we had problems in recovery of the ball. We came back in the second half with a good spirit and good organisation to recover the ball.

"[Kane's] second goal from a corner was difficult to accept and it put them in a good scenario.

"We have no chances up to this moment against us and this team have been clinical and very efficient."