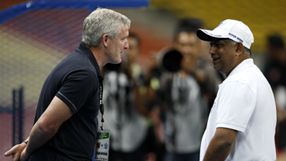 After a number of pre-season acquisitions, supporters had hoped the club would avoid the stresses of another relegation battle, having narrowly escaped the drop on a dramatic final day in May.

However, QPR lost for the fourth time in six matches this season to remain bottom of the table on two points, their cause not helped by the late dismissal of midfielder Samba Diakite in Monday night's London derby.

"Mark will sort it out. Look at his record. We would have won if we didn't go down to 10 [men]," Fernandes said on his Twitter account on Tuesday in response to a message from a supporter.

"I am relaxed and confident. Let's get all our players back and in form and fit and then let's see.

"Keep calm. 6 games does not make a season. I have learnt from many wise chairman."

Fernades appointed Hughes in January as a replacement for the sacked Neil Warnock, who had guided the club up from the Championship the previous season.

Central defender Clint Hill moved to left-back for Monday's match against the team Fernandes supports and tried to buy before purchasing QPR.

"That's all we had. We have 5 injuries in the back. That's the problem. You fans have to realise. It will come good. So much quality," Fernandes replied to another fan, who asked why Hill had been played out of position.

After goals by winger Matt Jarvis and Ricardo Vaz Te had earned newly promoted West Ham victory at Loftus Road, Hughes was asked whether he thought Fernandes would give him time to rectify the problems

"I would think so," the former Manchester United and Barcelona striker told reporters.

"We have had a big investment and we're looking to improve this year and we will.

"It is very, very early days but until we get positive results on the board then obviously everything is up for debate and a focus begins to come on the club as a whole. We just need to start winning football matches. If we do that, it goes away."

QPR, knocked out of the League Cup by Premier League rivals Reading 3-2 at home last week, next face sixth-placed West Bromwich Albion away in the league on Saturday before the international break.