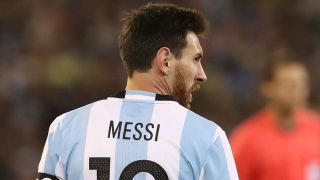 Lionel Messi is so good he should be banned until it can be proved he is human, Iran boss Carlos Queiroz has joked.

The Argentina star, a five-time Ballon d'Or winner, has been in sensational form once more this season during Barcelona's hunt for a second treble in four seasons.

Messi also scored a hat-trick in his country's final World Cup qualifier over Ecuador, sealing a 3-1 victory that secured their place at the finals in Russia this year.

Queiroz's side came close to a famous 0-0 draw with Argentina at the last World Cup in Brazil, only for Messi to score an injury-time winner in Belo Horizonte.

The 64-year-old believes that moment underlined the genius of the diminutive forward.

"I've always said that Messi is an extraordinary player," he told FIFA.com. "He's out of this world. If he were human, he wouldn't have had that magical moment in that match.

"I don't usually like losing, but I didn't come away from that defeat with a negative feeling. It's when something magical like that happens that you know that football is alive and kicking, and that's why it's one of the best sports in the world to watch.

"And it's even more of a special moment when it comes from a player who shouldn't be allowed to play by FIFA until it's proven that he's actually human!"

Queiroz faces another daunting prospect at the finals this year, with Iran drawn in the same group as 2010 winners Spain, European champions Portugal and Morocco.

The former Manchester United assistant and Real Madrid and Portugal coach is expecting another memorable occasion when his side meet Cristiano Ronaldo.

"It's going to be special, as it always is when you take on great players. In this case, it's the best player in the world," he said.

"But when the match starts there are just two teams who are trying to win. Football will decide who wins the day and who was better on the field of play.

"The memories stay with you, of course they do, especially in shared projects, like we had at Manchester and the Portuguese national team. That was a long time ago, though.

"Times have changed and now I've got other Ronaldos with me. They're important players… the likes of [Alireza] Jahanbakhsh, [Reza] Ghoochannejad, [Ali] Karimi. These are the Ronaldos I've got to look after now and who I've got to pay attention to achieve the success we all want."