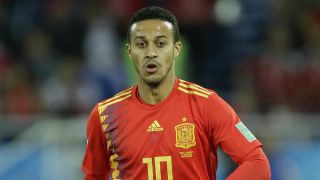 Thiago Alcantara making a return to Barcelona would represent an ideal move for LaLiga's champions, according to Rafinha.

The two brothers came through the ranks at La Masia to break into Barca's first-team but Thiago moved to Bayern Munich in 2013 to join up with former Barca boss Pep Guardiola.

Winger Malcom, defender Clement Lenglet and playmaker Arthur have already been added to Julen Lopetegui's squad ahead of the new campaign but Barcelona are understood to remain in the market for a midfielder.

Paris Saint-Germain's Adrien Rabiot is reported to be their top target but Thiago has been mentioned as an alternative and Rafinha believes his elder sibling would still fit seamlessly into the club's playing style.

"I would like to see Thiago at Barcelona again," Rafinha told a news conference ahead of Tuesday's International Champions Cup clash against Roma.

"I think he would fit in perfectly with the team's style of play."

Whether Rafinha would be around to enjoy a prospective reunion is a moot point after he spent the second half of last season on loan at Inter.

"Honestly, if I knew my future, I would tell you," said the 25-year-old, who has been able to count Lazio and Tottenham among his reported admirers.

"A lot of teams have been linked with me, that's true, but I'm not thinking about these things. It's not to do with me, other people are working on it.

"All players want to play football. They want to be where they can play the most minutes. It's the same for me, whether that's here or somewhere else."