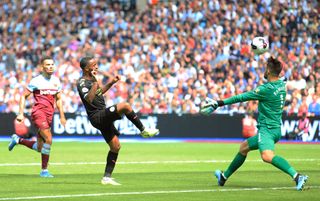 Raheem Sterling revelled in a perfect start to the season following his opening-day hat-trick at West Ham.

The England forward helped fire champions Manchester City to a thumping 5-0 win at the London Stadium on Saturday.

“It feels good but the important thing was starting well as a team and getting the win and the three points,” Sterling told CityTV.

“That’s what we’ve done and it’s a great way to start the season.

“It’s always good to score goals but at the same time you want to get a run of clean sheets going as well and long may it continue.”

Sterling has already been tipped as a contender for this season’s Golden Boot, but he added: “It’s early days. It’s about enjoying it and keeping winning – that’s the most important thing.”

Gabriel Jesus put City into a first-half lead and had another disallowed – the first goal to be ruled out by VAR in the Premier League – while Sergio Aguero got off the mark with a twice-taken penalty.

It was a chastening start to the season for West Ham, who have spent more than £70million over the summer but were left chasing shadows in the second half.

“We have another game next week (at Brighton) that we need to look forward to, capitalise on, and take three points from there.

“In the first half the game was close. Once they got the second and third it was game over.

“It’s difficult to come back against City, but we will review the game, look at what went wrong and try to put it right next week.”