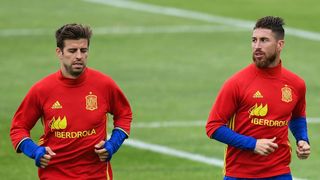 Spain captain Sergio Ramos believes talking about politics hurts the national team, but he revealed he gets along "quite well" with Barcelona defender Gerard Pique.

Pique had voiced his support for the controversial Catalan independence referendum, which was met with a heavy-handed response by Spanish police in October.

That stance saw him whistled at by supporters during the international break, but Spain managed to orchestrate wins over Albania and Israel as they sealed a place at the 2018 World Cup.

Ramos said speaking about politics made life harder for the national team, although he insisted Pique's behaviour was excellent.

"I like to enjoy the scenery, the environment... the only thing I always say as captain of the national team is that we must be aware of our every move.

"Pique's behaviour has always been exemplary despite what others may think."

Despite being international team-mates, Ramos and Pique have previously endured a frosty relationship and found themselves involved in public disagreements.

But Ramos said that had changed, acknowledging there was no relationship between the pair previously.

"If you compare it with the old relationship we had, I tell you that today we get along quite well. Before there was almost no relationship," he said.

"We respected each other because we played together and we knew that together we were one of the best centre-back pairings in the world.

"When you are growing and maturing you leave aside things that you previously gave importance to and do not have now. That has made the relationship better."