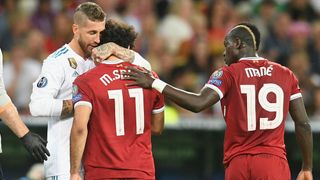 Andy Robertson has described Sergio Ramos as "quite clever" but refused to blame Liverpool's Champions League final defeat on the injury the Real Madrid captain caused for Mohamed Salah.

Jurgen Klopp's side suffered a 3-1 defeat in Kiev on Saturday as Madrid claimed the trophy for a third year in a row.

Liverpool's hopes of upsetting the holders were dealt a blow half an hour in, when Salah went off with a shoulder injury following a tangle with Ramos in the Madrid half.

A number of pundits and social media users have suggested the centre-back deliberately held on to Salah's arm when jostling for the ball, thereby making his fall awkward.

Klopp compared the challenge to a wrestling throw but Robertson is not certain Ramos' act was malicious.

"I don't know," he said. "I was trying to get the ball off Mo. I think it is just how he has landed but Ramos is quite clever, isn't he?"

Asked if losing Salah was the reason for his side's defeat, the full-back replied: "We are clutching at straws if we are saying that. It is just the way he has landed on it. It's unfortunate. Hopefully, he'll come back bigger and stronger.

Robertson impressed once more in the final but admits he would rather have had a poor game if it meant Liverpool had got their hands on the trophy.

"It was an achievement to get here but second is as good as last, in my book," he said. "That's just how I am. I'd rather have had a stinker and we won. I'd rather 10 players turned up and I didn't but we went home with the trophy.

"There was just devastation in the changing rooms. We are all so upset. It's just unfortunate. We have been on a good journey but we have just fallen short. Believe me, the lads are gutted. It was a 50-50 chance and unfortunately we never took it."

Loris Karius was at fault for two of Madrid's goals and was distraught after the final whistle, but Robertson maintains the rest of the team are behind him.

"We win as a team, we lose as a team. We fell short," he added. "Of course he made mistakes. He did. But we are not blaming him. He will hold his hands up. He has been incredible since he got the number one jersey.

"He is young and he will learn from it. He will be a top, top keeper. We have fallen short and there are no words that we can say to Loz that will make it better for him. We went around him. We all gave him a hug and tried to lift him. I don't think anyone thought that was going to happen."