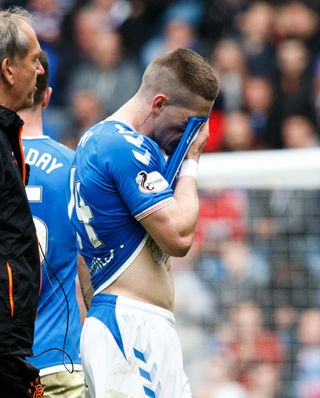 Rangers boss Steven Gerrard said losing Ryan Kent to injury was a blow for everyone at the club after the new signing limped off with a hamstring issue in his side’s 3-1 victory over Livingston at Ibrox.

Second-half goals from James Tavernier, Alfredo Morelos and substitute Brandon Barker saw the hosts come from behind after Steven Lawless’ 47th-minute penalty had given Livingston the lead.

But the result was marred by a first-half injury to new signing Kent, who came off in the 41st minute after pulling up in the Livi half and receiving treatment on the pitch.

The hamstring problem brought a premature end to Kent’s second debut, having rejoined the club he played for on loan last season from Liverpool in a deal understood to be worth a guaranteed £6.5million on deadline day.

Gerrard was disappointed by Kent’s injury, which he predicted would keep him sidelined for a few weeks, but insisted it was the only negative aspect of the day.

“He’s got a hamstring injury, unfortunately. It’s a blow for Ryan, a blow for me, a blow for all of the supporters,” said Gerrard.

“He’s trained well all week and looked ready to go. Unfortunately these things happen in football but that’s the only disappointing thing to come out of today really – the injury to Ryan.

“We’ll assess it in the coming days but I predict he’ll be missing for at least a few weeks.”

Rangers were dominant in the first half but could not find the net, with Scott Arfield’s shot which came back off the bar the closest they came.

Gerrard revealed he used the half-time break to challenge some of his players to win the game for Rangers.

“Unfortunately we took another setback, so having not got the early goal and conceding the penalty, the challenge became even more difficult and complicated.

“But I think that provoked us into our best. I think from going a goal down we were excellent, looked really dangerous and could have scored a few more.

“Over the course of the 90 minutes, we certainly deserved to win but we weren’t at our best.”

Livingston manager Gary Holt was back in the dugout after missing his side’s win over St Mirren before the international break because he was in hospital with a blood condition.

He said he was back to full health and expressed his pride at Livi’s performance.

“I’m proud as punch. I asked them to stand toe-to-toe and be big and bold.

“And when you come to a place like this, you need small decisions, the margins to go in your favour.”

Holt was unhappy to see his side reduced to 10 men in the 73rd minute when Lyndon Dykes picked up a second yellow card for a foul on Connor Goldson and said he would consider an appeal.

“I think it’s very harsh. He’s not gone up and thrown his elbow, he’s contested a ball in the air and if that’s what we’re going to get, we’re going to be playing with eight or nine men every week.

“It’s a hard one but I think we’ll contest the yellow.”