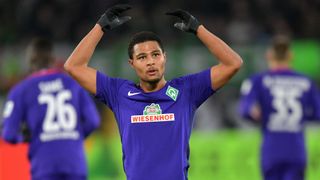 The 21-year-old has been a particularly bright spot in a largely strong campaign for Alexander Nouri's side, who are sixth in the Bundesliga table with three matches remaining.

Gnabry has scored 10 goals in 24 league appearances since joining from Arsenal in a €5million deal last year and his consistent form has seen him linked with a possible switch to Borussia Dortmund.

Leipzig have now emerged as candidates for his signature, however, as they look to strengthen their squad for another assault on the domestic title and the Champions League next season.

"Gnabry is an interesting player," Hasenhuttl told Sky Sport News. "He is a very fast player with a good finish and certainly one of the hottest properties in German football.

"He's a player who would fit into our plans."

It is reported in Germany that Gnabry has a clause in his contract that would allow him to leave Werder for as little as €8m.

Leipzig, second in the table, are guaranteed a top-four finish but their participation in next season's Champions League is in doubt due to UEFA regulations over club ownership.

RB Salzburg are on course to win the Austrian top-flight title and qualify for Europe's premier tournament, which would violate UEFA's rule that "no individual or legal entity may have control or influence over more than one club participating in a UEFA club competition".