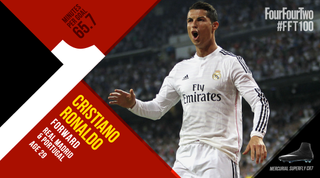 The 2014 edition of the list, released today, features 11 players from the Santiago Bernabeu outfit, one more than the Camp Nou club, although both trail in the wake of German giants Bayern Munich who own 14 of the top ton.

Cristiano Ronaldo tops the chart for the second year in succession after leading Los Blancos to their 10th European Cup triumph with victory over city rivals Atletico.

While Gareth Bale, the match-winner in Lisbon by scoring Real’s second goal in their 4-1 success after extra-time, also features in the top 10 by placing fifth.

Lionel Messi, now the all-time top scorer in both La Liga and the Champions League, is only third on FourFourTwo’s latest list after slipping behind World Cup-winning captain Philipp Lahm. ‘The Flea’ is joined in the top 10 by team-mate Luis Suarez after the Uruguayan netted 31 league goals for Liverpool last term.

Rakitic played a key role in Sevilla’s 2013/14 Europa League success, with Rodriguez and Navas sealing switches to the Spanish capital after standout performances for Colombia and Costa Rica at the World Cup in Brazil.

Juventus, Serie A champions from the past three seasons, are the fourth most represented side with nine, their rock-solid defence seeing Gianluigi Buffon, Martin Caceres, Stephan Lichtsteiner, Leonardo Buffon and Giorgio Chiellini all included.

Chelsea, runaway leaders of the Premier League, are the highest ranked English club with eight of their players among the 100, with Diego Costa making the top 10 and Thibaut Courtois and Cesc Fabregas both in the top 20.