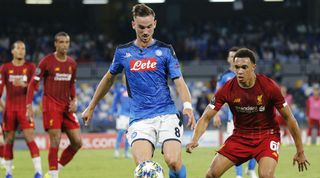 Manchester City are understood to have held an interest in Ruiz for a while and could be considering a summer bid.

However, according to the Express, Real Madrid sent scouts to watch the midfielder in action for Napoli on Friday.

Ruiz scored the winner against Brescia in a dramatic comeback which saw Napoli claim all three points with a 2-1 victory.

City are on the hunt for a replacement for their long-serving playmaker David Silva, who turned 34 in January.

Silva announced earlier in the campaign that this would be his last season at the club.

The Spaniard could be succeeded by his countryman Ruiz if the reigning Premier League champions can agree a deal with Napoli.

Real Madrid, meanwhile, are set to renovate their midfield in the summer and Ruiz is believed to be the number one priority.

It's clear that the interested pair will have to dig deep into their pockets if they are to convince Napoli to sell.

Club chairman Aurelio De Laurentiis was fiery in his response to the suggestion he could sell Ruiz.

"I paid €30m for Fabian and he’s a fantastic player," De Laurentiis said.

However, it's reported that a bid closer to the £80m may be enough to force Napoli's hand.

Real Madrid do have one significant advantage over City in that they're likely to offer Champions League football next season.

Man City are currently banned from the competition for two seasons, thus weakening their appeal to top players.

Quiz! Can you name every Premier League club that Riyad Mahrez has scored against?