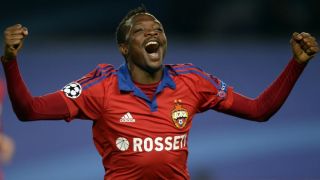 New Leicester City signing Ahmed Musa insists he is not feeling the pressure to perform following his record transfer from CSKA Moscow.

Musa joined Premier League champions Leicester on Friday in a four-year deal for a club-record fee of around £16million.

The 23-year-old joins after scoring 54 goals in 168 games for CSKA in four-and-a-half years with the club, winning three Russian Premier League titles and a Russian Cup.

But as Leicester prepare for their title defence, Musa believes he feels no added pressure despite his price tag.

"I have never been under pressure at any club I have played and here won't be different," the Nigeria international told the Leicester Mercury.

"I will be my usual self at Leicester as there is no cause to be under pressure.

"I love scoring goals and that I have done at every club and league I have played in. That's the same target I have at Leicester City.

"I am looking forward to score as many goals as possible to lift the team so we can achieve together."

Former Leicester striker Alan Young, who was the club's record signing in July 1979 when he joined from Oldham Athletic for a then-record £250,000, says Musa just needs to give everything on the pitch to win the support of the fans.

"The fee never weighed on me at all. I made my debut at Filbert Street against Watford and scored both goals in a 2-0 win and that was that. I had three of the best seasons of my career," the 60-year-old said.

"The City fans could see I was giving my all and I immediately forged a relationship with them that lasts to this day. If they can see you are giving everything to the cause they will back you even if you have the odd bad game, regardless of how much money has been paid."