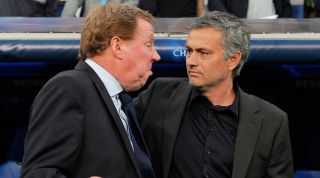 Despite spending "astronomical" amounts on player wages, QPR were relegated from the top flight after finishing bottom with just four wins.

Former Tottenham and Portsmouth boss Redknapp took over from Mark Hughes at Loftus Road in November, but was unable to arrest the slide despite the likes of Loic Remy, Djibril Cisse, Adel Taarabt, Ji-Sung Park, Chris Samba and Jose Bosingwa being part of his squad.

And Redknapp lashed out at the attitude of QPR's players last season, giving a revealing insight into the "arrogant" and "contemptuous" dressing room in his new book, Always Managing: My Autobiography, which is currently being serialised by The Daily Mail.

Redknapp said: "Jose Mourinho would not have kept QPR up last season. The squad I inherited in November last year was poorly balanced, undisciplined and short of confidence.

"The directors and owners were nice people but they were naive in football terms and I think certain people they had trusted, agents and advisers, had let them down quite badly.

"They had probably never been around players, or indeed football before, did not know the market and had spent unwisely on some very average foreign imports.

"They had players on astronomical wages, being watched by crowds of 18,000 at Loftus Road. It wasn't sustainable. It wasn't right."

Redknapp reserved special criticism for Bosingwa and said the commitment of his players – who frequently turned up late for training – was almost non-existent despite their relegation battle.

"Rangers had players like Jose Bosingwa, who just six months earlier had won the UEFA Champions League final with Chelsea, but he wasn't going to give his all," he said.

"I found out the extent of the problem after we beat Fulham and Bosingwa refused to sit on the subs bench. I'd had problem players in the past but I thought his attitude was disgraceful.

"I fined him two weeks' wages — and that was when I got the shock of my life when I found out how much he was on. Bosingwa's salary was ridiculous.

"What they (owners) had was a squad full of very average footballers earning more money than they deserved. It made them very arrogant and contemptuous.

"They would rather come in late every day and just pay the fine than behave in a professional manner. Getting them in was daily aggravation.

"There were players who were late three, sometimes four times each week – and the most we ever trained was five days! There was always an excuse."

Having shipped out several members of his high-paid squad, Redknapp spent over £10million in the close-season bringing in the likes of Matt Phillips, Charlie Austin and Karl Henry into his side.

QPR currently sit second in the Championship with eight wins and two draws from their 10 matches, leaving them well-placed for an immediate return to the Premier League.