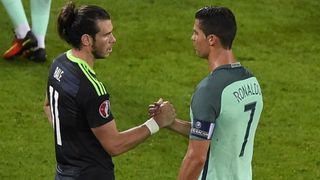 In the end there was no torch to be passed from Cristiano Ronaldo to Gareth Bale in Lyon, as Portugal's main man remained king of all he surveys by booking a Euro 2016 final place at Wales' expense.

There has been a creeping sense of this tournament in France being the time of Bale, as engaging off the pitch as he is show-stopping on it and the leader of the latest example of 2016's footballing stock-in-trade - the underdog success.

Ronaldo has appeared in a foul stink either side of the white line, but, back at the stadium where his previous two goals in the competition arrived versus Hungary, he tore apart the narrative as special players do so adeptly.

It did not take long for their contrasting moods to show on a balmy evening.

Ronaldo seized on a slack early pass from James Chester and was met by a clattering ball-and-man challenge courtesy of Wales captain Ashley Williams. Upon not receiving a free-kick, he slammed the turf and howled to the heavens - in other words, his default Euro 2016 setting.

The pattern of Ronaldo's play underlined his change of approach during his early 30s - one where he prowls the final third with menace but usually waits for the game to come to him.

It is Bale who is now the marauding footballer. While Ronaldo only touched the ball twice in his own half and 21 times overall during the opening 45 minutes, Bale constantly came back to halfway, looking to spark Wales into life.

He shrugged his illustrious fellow Madridista aside on a driving run down and tested goalkeeper Rui Patricio after skipping past a lumpen challenge from Danilo.

Bale also whipped a cleverly worked corner over the crossbar during Wales' most enterprising spell and, even though Ronaldo spurned a back-post chance on the stroke of half-time, Chris Coleman's team could be happy with their work. They were comfortable.

But it is the business of great players to alter the whole complexion of a contest in a split second and Ronaldo literally jumped to the task after 50 minutes to haul himself level on a record nine European Championship goals with Michel Platini.

Raphael Guerreiro's cross from a corner taken short on the left gave him an opportunity to demonstrate supreme athleticism arguably unmatched by anyone else to have played the game.

Ronaldo's leap and ability to hang in the air made mincemeat of Chester and the resulting header was emphatic to an improbably powerful degree.

He knew this was the moment. As Wales looked to regain their poise, Ronaldo worked with cold precision, spying the opportunity to shoot. The scuffed attempt will not rank among his finest assists, but Nani accepted the scraps.

In the space of three minutes, 0-0 was 2-0. Ronaldo had changed everything and he was threatening to unfurl the full repertoire when he sped past Chester and drew a foul, from which he rippled the top of the netting with a rasping free-kick.

To Bale's credit, he relentlessly battled against the inevitable and was not discouraged by misplaced passes and over-hit free-kicks, or the boos of Portuguese supporters loyal to their hero and fearful of his threat.

Ultimately the night belonged to Ronaldo. He concluded it as he started, at the tip of Portugal's attack and almost added a second by rounding goalkeeper Wayne Hennessey and shooting into the side netting.

If the hard yards Bale ploughed fruitlessly in Lyon are no longer Ronaldo's domain, it does not mean the end is remotely close for the latter superstar. He is now a masterful striker.

The Madrid team-mates shared a long embrace and conversation on the field at full-time. It seemed fitting because, after Ronaldo and Portugal aim for weekend glory and Bale and Wales reflect on the journey of a lifetime, they will reconvene in the Spanish capital as supreme forwards far more likely to complement one another than tread on each other's toes.