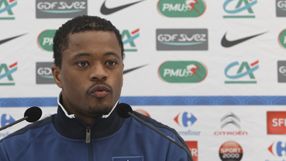 Manchester United left-back Evra was suspended for five matches by the French federation after the France players went on strike to support Nicolas Anelka, who was kicked out of the World Cup side for insulting then coach Raymond Domenech.

New coach Laurent Blanc left him out of the squad against Brazil in a friendly after his ban ended in January, but he has finally recalled Evra and Franck Ribery for Friday's game in Luxembourg and next Tuesday's friendly against Croatia.

"I want to turn the page," Evra told a news conference at France's training camp on Wednesday.

"I want to be a solution, not a problem, for the France team."

The 29-year-old Evra is likely to start on Friday as Blanc has to do without Eric Abidal, who last week underwent surgery to remove a tumour on his liver.

Evra is aware, however, that he faces an uphill battle to restore his reputation after France's first-round exit in South Africa.

"When some people see Patrice Evra, they think 'World Cup'," he said. "But I am not going to give up. I'm going to fight as I always do. I know that the most difficult is yet to come.

"I'm back in the France squad to perform and win with my country."

Evra, who sometimes wears the captain's armband at United, said he had always been confident he would don the France shirt again.

"I was confident, I know what I did but I am proud to have been this team's captain at the World Cup," he said, adding that he had received the toughest punishment from the French federation because he was the captain.

"I know that I will always live with this scar," he said.

Although Friday's game is likely to be straightforward against a side who have yet to score a goal in their Euro 2012 qualifying Group D, Tuesday's meeting with Croatia will be another story.

That game will be played at the Stade de France, where Evra and Ribery could face an angry crowd.

"After the World Cup, I only got messages of support," said Evra. "A stadium is like an arena, there's always a few boos."